FOR SALE BY NEGOTIATION

We have a large number of medal groups purchased for investment or for sale on behalf. Whilst we are happy to retain these as appreciating investments we do make these available by negotiation to serious and interested buyers. Most will suit institutions and serious investors.

AN HISTORIC GENERALS MEDAL GROUPING INCLUDING KCB CSI AND DSO

An historic set of medals to a General, ADC to King George VI and at one time Military Secretary to the India Office.

We can provide full details to legitimate purchasers.

The recipient was commissioned into the Indian Staff Corps in 1898.He was first appointed to the staff as Staff Captain, Intelligence and General Staff Officer 3rd Class from 18 June 1906 to 17 June 1910, during which time he served on the Mohmand and Zakka Khel expeditions of 1908. He was reappointed to the staff serving World War I from 5 September 1914 and spent the war in France & Belgium as a staff officer, ending up a General Staff Officer 1st Class from 18 January 1918 to 31 October 1920. Subsequently he was appointed Deputy Chief of the General Staff and Director of Staff Duties at Army Headquarters, India 13 December 1929 to 6 September 1931.He was Military Secretary to the India Office from 1931 to 1933. Then as General Officer Commanding Peshawar District from 26 November 1933 to 1 November 1936, he commanded the latter part of the Second Mohmand Campaign. He was Military Secretary to the India Office again from 1937 to 1941.

The breast set of medals includes his DSO, IGS 1914 trio with MID and other awards. They are mounted as worn by him to the Queens Coronation. An image is included showing him wearing these medals in his full dress uniform for the Coronation. We have added the Queens Coronation Medal (to which he will be entitled) for display. The KCB and CIE come with boxes of issue. The CSI is a replica commissioned by us as this was a returnable award. The ribbon on it is his. The set includes two foreign neck awards from Siam and Japan. These were npot permitted to be worn following their entry into WW2 . In earlier years he wore them mounted as breast medals in his mounted set (image available). Complete with his cap insignia. The set is framed for display in a conservation manner.

Also available is a mounted and cased set of his miniature awards. These include marked and unmarked gold items. This can be sold as part of the collection or separately

An unique and premium investment set of medals.

A rare and important Distinguished Service Medal for Gallipoli.

Awarded for the behind enemy lines suicide mission prior to the landings at Gallipoli .On the 17th -18th April 1915 Lieut. Cdr. Brodie attempted to take the E15 through the Dardanelles. The Turkish guns opened fire killing Brodie and 6 of his men and the rest of the crew were captured by the Turks. The British did not want this new submarine to fall into the hands of the enemy and made determined efforts to destroy it. Two steam powered picket boats from HMS Triumph and HMS Majestic were fitted with torpedoes so that they could steal in under cover of darkness and destroy the E15. First Lieut Eric Robinson VC was chosen by the Admiral to lead the attack. The mission was considered a suicide mission and the men were not expected to return. The two boats were spotted and came under heavy fire. Majestic's boat fired a torpedo which hit the E15 but was then hit and began to sink. Robinson took his boat alongside and rescued all the crew despite being under heavy fire

DSM is named SS1501 R COCKS AB HMS Majestic (AB RN on Star and pair named Leading Seaman RN) . WW1 DSMs are normally named in typed letters with the action mentioned. This is impressed in the same style as WW1 service medals with ship only - exactly as the medal to William Longworth for the same action.His medals were sold at DNW in 1999 for 1700 pounds plus premium - a huge sum at the time. I wondered if the DSM was a replacement for one lost during the war. The medals are lacquered as is the practice in Canada and mounted as worn and have the normal edge knocks expected

Robert Cocks was born in 1887 and joined the Navy in 1906. He served on various ships and in 1911 he transferred to the RFR. When war broke out he was on Vivid and transferred to Majestic for Gallipoli service, where he won the DSM. He served on Majestic & Europa for much of the the war. He took his discharge in 1921 and at some stage has moved to Canada, where he served during WW2.

From my private collection 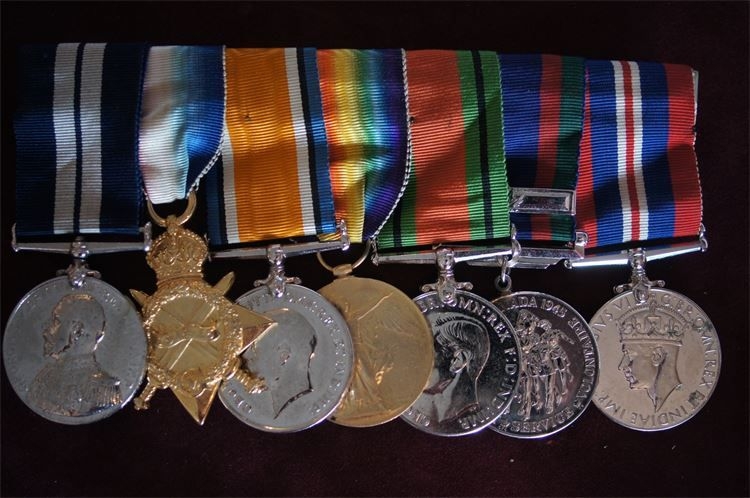 An interesting set of medals and insignia to Major Percy Wright, Commanding Officer 27th NZ Machine Gun Batn and according to his family - a Prisoner At Colditz.

Sold with copied documents and assorted badges. Whilst we have not been able to verify the Colditz account it is known that he was taken by German Submarine from North Africa to Italy as a high value prisoner - so it is very likely he was imprisoned at Colditz.

from Grandson around 10 years ago 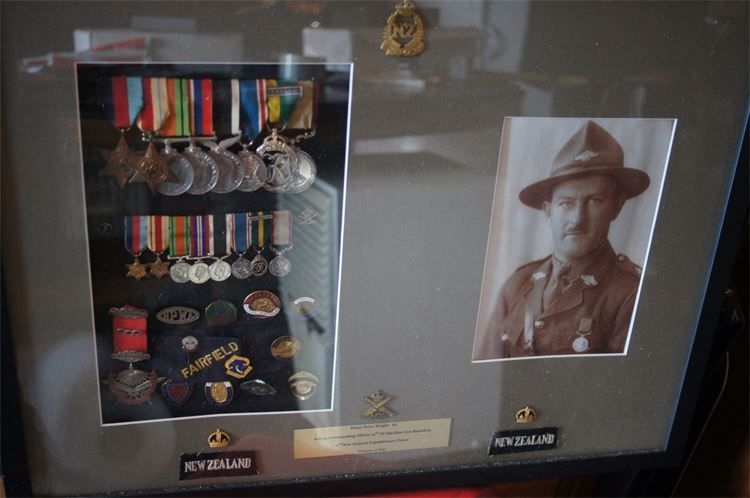