Part of a larger group of medals at some stage including Boer War or China, WW1 trio and silver war badge. William Thomas Fox was born in 1880 and enlisted in the RN in 1899. At the outbreak of WW1 he was serving on HMS New Zealand (later Zealandia) . His file shows that he was invalided due to burns to his upper extremities, head and neck.

A COMPLETE WW1 TRIO AND MEMORIAL PLAQUE TO WELLINGTON INFANTRY

William Tryr was born in 1876 and was working as a farmer in Paeroa when he enlisted in August 1915. He served with the 2nd Battalion, Wellington Infantry Regiment in Western Europe and returned home in 1918 having been deemed to be no longer fit for service due to asthma and bronchitis.He died in New Zealand 24 December 1919. His death was deemed to be as a result of war service. He is buried in Christchurch.

1914 trio all correctly named together with ribbon bar also including the prototype citation.

The trio are all correctly named and the Star is in the correct early type and named ANSON BATN. The recipient was C 1/2453 D McAlpine AB RNVR. The clasp detached but with signs of old thread attaching it to the ribbon.

Duncan McAlpine was born in March 1895. He was a Shipwright Apprentice when he enlisted in the RNVR in September 1913. He first served on Achilles and was then in the Royal Naval Division (Anson Btn) from June to October 1914. Thereafter he served on Victory, Virginian, Excellent and President. He was demobilised in March 1919. 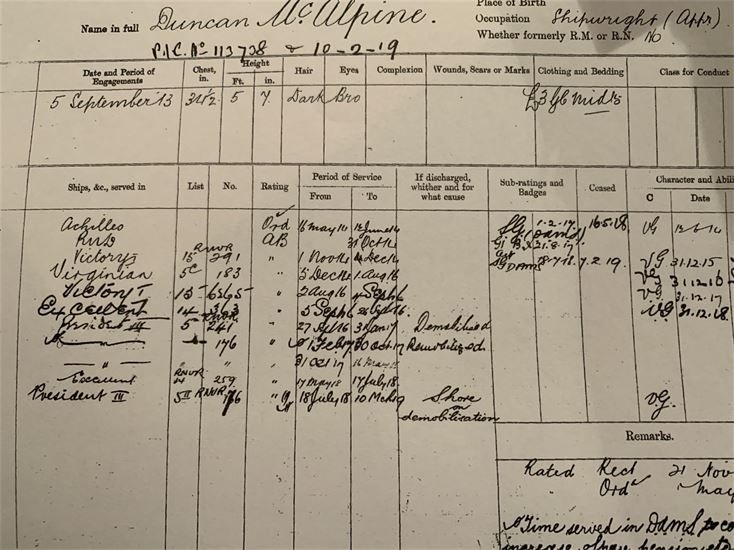 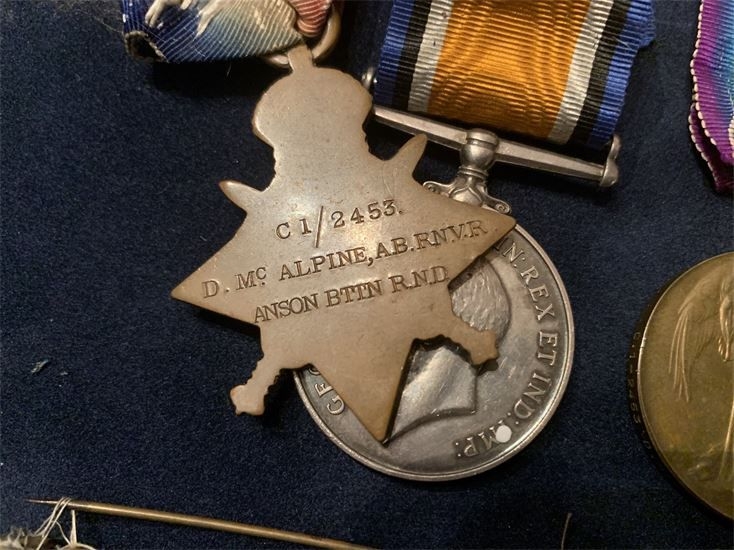 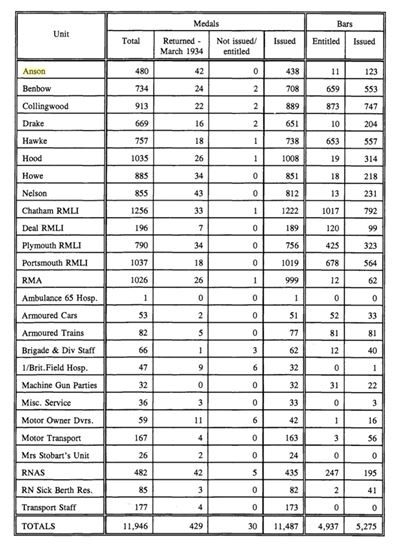 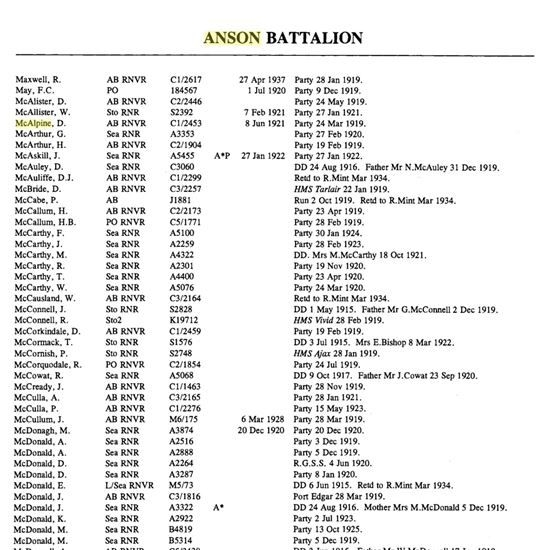 A GOOD YEOMANRY CASUALTY SET FOR OPERATIONS NEAR DELVILLE WOOD

Henry Pierce served in the Sussex Yeomanry as part of Cavalry Div, attached to the Sussex Regt which was undertaking operations near Delville Wood when he was killed on 30 August 1916.

All medals correct, and his full entitlement. Name on back of photo. A very good investment

These were found by me in America recently. The set comes with the rare scroll named to him with ROYAL AIR FORCE in blue. In 30 years of collecting medals this is the first WW1 RAF scroll I have owned. Also included are two images of him, one in uniform wearing the ROYAL FLYING CORPS maternity jacket showing RFC insignia.

I have added a couple of badges which may or may not be genuine.

We can find no entitlement to the NZ WW2 service medal. It may be that he enlisted in the NZ Forces whilst based in the UK. The medals are mounted as worn.

Sold with NZ service file for Korea showing his entitlement to the Korea Medals. No mention of WW2 NZ service. Also noted that the NZOSM, NZDSM and South Korea Campaign medals were claimed by him prior to his death.

‘During the operations near Bellicourt from 30th September to 2nd October 1918, this N.C.O. rendered most gallant and valuable service as No. 1 Lewis gunner. During the early stages of the attack he repeatedly rushed forward with his gun to give covering fire to the rest of his Company. He several times went out under heavy machine gun fire to collect magazines from casualties and was thus enabled to keep his gun in action throughout the operation. While a bombing block was being built he went out and took up a position in the open from which he was able to give covering fire and keep the enemy away until the block was complete.’

Lyons was wounded in action, 19 July 1916, and advanced to Lance Corporal in September 1916. He was wounded again, 13 March 1917, and was awarded the M.M. for his gallantry near Bellicourt on the Somme, 30 September - 2nd October 1918. The Battalion records give heavy hand to hand fighting for the period, with 3 German officers and 31 other ranks taken prisoner, and over 200 German dead counted in the area. Six 77mm field guns and 42 machine guns were also captured. Battalion casualties amounted to 3 officers and 18 other ranks killed in action and 4 officers and 34 other ranks wounded. 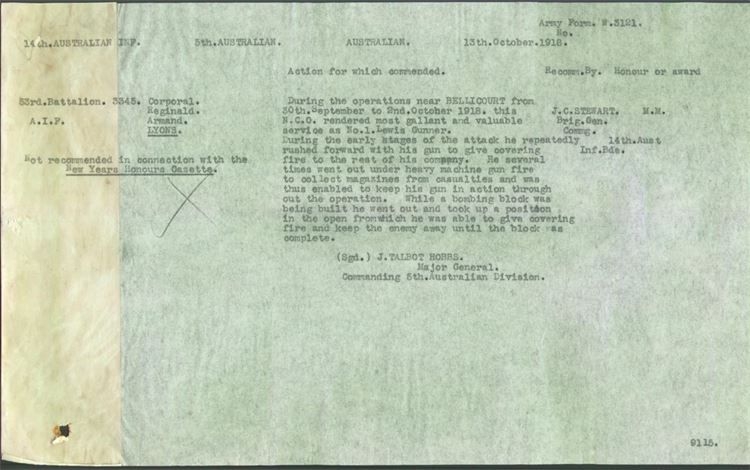 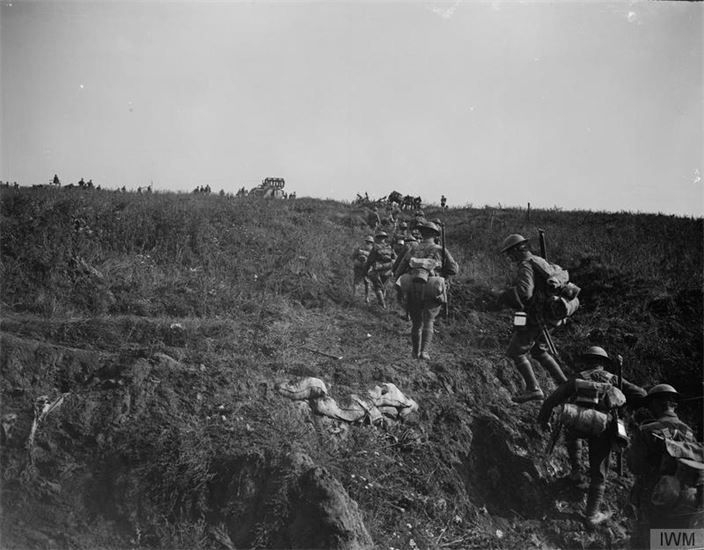 M.M. London Gazette 22 July 1943: ‘For gallant and distinguished services in the Middle East.’ The recommendation for an Immediate award states:

‘On 26/27 March, 1943, Gnr Moore was the operator of an 11 set of an F.O.O. party of 52nd Field Bty RA that went forward in support of a platoon of 4/6 Rajputana Rifles to capture Pt 680 (DELHI) in the hills WEST of MEDININE. This involved an all night approach march finishing with a very steep and difficult climb of 1200 feet, during which Gunner Moore was carrying a No. 11 set. Just before first light the party approached the summit, which it found held in force by the enemy. They were forced to withdraw half way down the feature, where they were pinned to the ground by very heavy Mortar and MG fire with the enemy in front and on both flanks, and in addition enemy patrols in the rear.

In spite of the difficult situation, however, Gnr Moore immediately established communication with the battery, which enabled repeated enemy attacks to be engaged and driven off. The enemy mortar and MG fire became so heavy that it was considered necessary to change the position of the OP three times. Gunner Moore only changed his position on definite orders to do so, as by this time the wireless set was the only means of communication for the whole party, the infantry set having been knocked out, and Gnr Moore was afraid that, if the position was changed, communication might be lost. Gnr Moore, however, regained communication each time, enabling fire to be brought down on the enemy again and again.

Owing to Gnr Moore keeping communication the party was eventually able to withdraw under cover of darkness. Even then Gunner Moore kept his set open to the last possible moment.

His devotion to duty,his cool bearing, and his complete disregard of personal safety under these most difficult conditions, were a continual source of inspiration to all who saw him.’

Harry Moore was a native of Rawtenstall, Lancashire. Sold with original War Office letter forwarding the M.M. and a Post Card photograph of the recipient in uniform.

A WW2 set with 2 clasp General Service Medal. Issue box and slip for WW2 medals shows the award of France and Germany set. Africa Star and Defence medal not stated but seem probably. Apparent WW2 Parachute Regt service. Certainly worth further research into whether he jumped on D Day.

The GSM comes with letter verifying Palestine clasp and the roll confirms SE Asia clasp with Army Air Corps and Parachute Regt (7 Para). I can’t id him on the Palestine roll.

The GSM has been officially re-impressed / corrected. Medals to Paras of this period are named AAC. Not faked as SE Asia GSMs available un-named quite easily so a faker would use one of them rather than erasing another medal.

A good set with Para service. Supposed post war SAS service but not able to be verified. I have had this for quite a number of years. 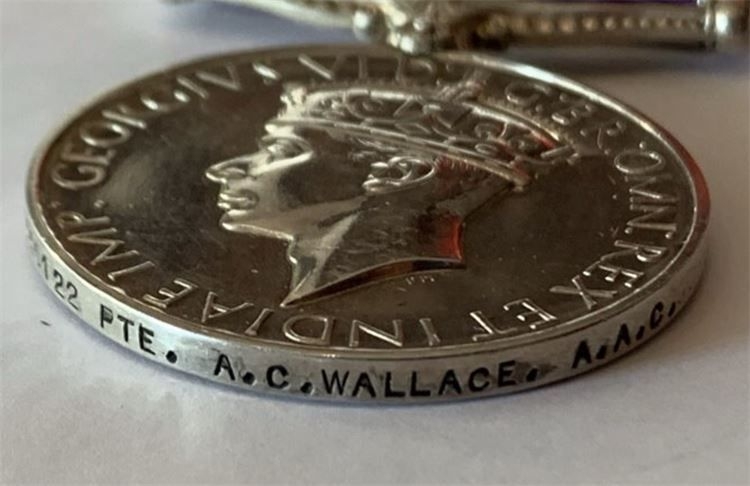 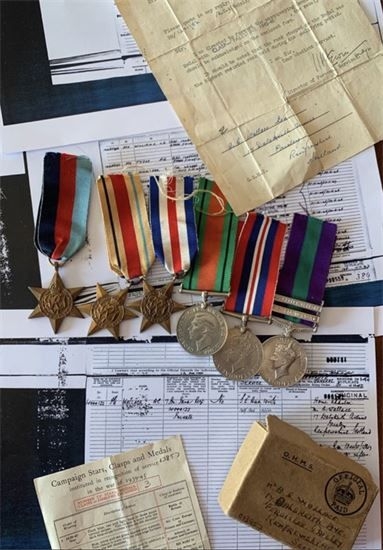 Medal is near mint. He died 25 August 1886. Worthy of further research to see how and where he died. 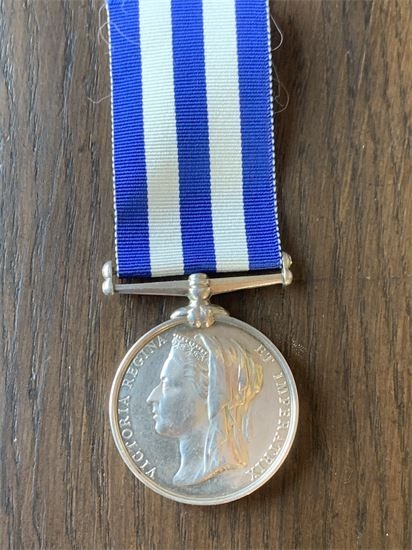 Sadly the name has been erased from this rare medal, one of 110 awarded. HOWEVER as there was only 110 awarded and some parts of the name are visible it would be possible for a patient collector to identify the recipient of the medal

ABYSSINIA MEDAL 1869 TO AN EVENTUAL GENERAL

A rare 1869 Abyssinia Medal named as Asst Surgeon , Bombay Med Dept. On original ribbon and pin and in old case. A rare and important medal. From my private collection and purchased in the UK around 15-20 years ago.

He graduated MD in 1859. He studied at Edinburgh Medical School at sometime in 1859 and 1860 before gaining registration of his Medical qualifications in 1860. He served with the Army in Abyssinia between 1867 and 1868 and assisted in the action of Arogee and assault and capture of Magdala for which he gained a medal.

In 1893 Peter Turnbull became Surgeon Major General of the Indian Medical Service in Bombay, a fellow of the University of Bombay and Surgeon General with the Government of Bombay. He died on 7th October 1921 in Edinburgh and is buried there in Grange Cemetery.

His archives and documents are held by Glasgow University. 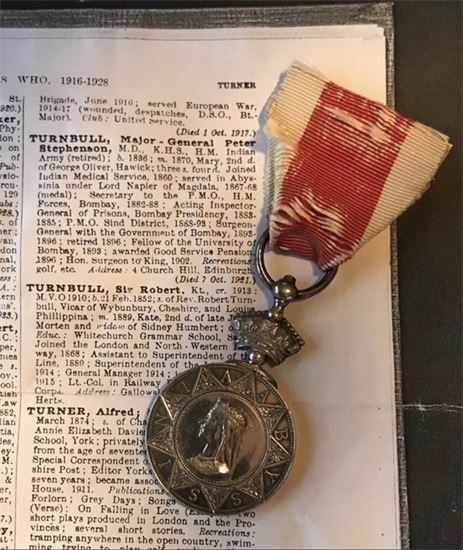 The historic and unique set of medals to Wing Cdr Baigent DSO, DFC and bar AFC

complete with his vitally named NZ Defence Service Medal and an impressive archive of paperwork. Logbooks are included however a WW2 one is missing. This is believed to have been misplaced when the medals were on loan to the RNZAF Museum from the 1950s through to around 2015. The archive included is impressive and includes is diary of raids, numerous photos in 2 albums as well as assorted unmounted images, certificates, telegrams etc. This is most certainly a serious collection, worthy of a book as Baigent was the youngest Wing Cdr in WW2 as well as being CO of 75 Squadron.

Offered on behalf of a private collector

A KEY GROUP TO ONE OF THE FOUNDERS OF THE ROYAL FLYING CORPS. MONS TRIO AND CLASP NAMED AS SGT MAJOR RFC. WING CDR BRUCE MBE 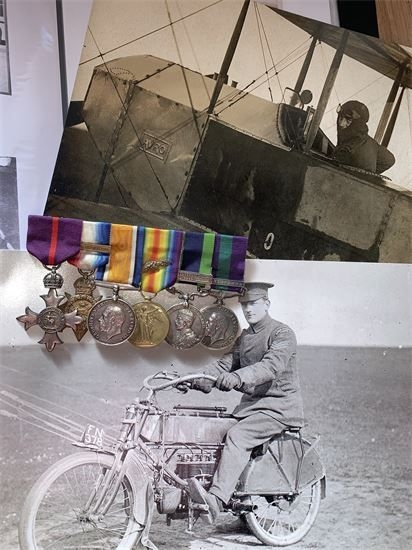 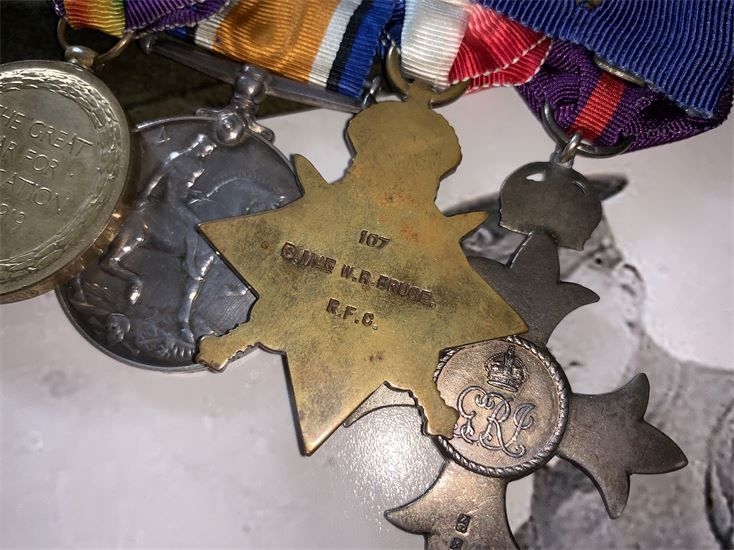 Very minor enamel damage but a lovely piece. Sadly no history with this order of knighthood.

A WW2 GROUP WITH MID TO A CAPTAIN , ROYAL ARTILLERY

Un-named medal set with MID Certificate and a bundle of documents and a group photo relating to Captain Ronald Harold Vaughan-Williams of J Troop, 359 Bty, 109 LAA Regt RA, which was particularly active as it moved through Normandy, Belgium, Holland and Germany.

Provenance Britannia Medals, UK about 15 years ago for my private collection

A MODERN MULTI CAMPAIGN SET TO THE ROYAL ARTILLERY

Nato Former Yugoslavia, Nato Kosovo, Op Telic Iraq Medal correctly laser named GNR RA, UN Cyprus Medal and 2012 Jubilee Medal. The medals mounted as worn. The Jubilee Medal tacked on the older mounting. I suspect that the recipient has discharged from the services and joined a uniformed service which qualified for the Jubilee Medal such as the Police or Prison Service. A nice set representing a decent number of deployments.

Provenance: sold to a dealer in Southampton, UK by the recipient and purchased by us from them in Feb 2018

A NZ Volunteer Service Medal to the Auckland Regiment

A bit of loss of beeswax filling to naming at 4 o'clock due to small edge knock or rubbing.

A great medal. The number isnt a WW1 number. Probably his full entitlement

A rare medal to a Tunneller. Many of their bravery awards were not in the face of the enemy so the MSM was often awarded instead.

THE MEDALS TO PRINCESS MARGARETS DRIVER AND VALET

Royal Victorian Medal and 2002 Jubilee Medal with certificates and a folder of related documents. Both medals un-named as issued. He returned his medals following the death of Princes Margaret but later had them returned to him. There are a number of newspaper clippings with the medals and it seems he fell out with the Royals after the Princess's death. As with Paul Burrell it seems various accusations had been made about his retention of cards etc. After Princess Dianas death he too had been tasked with the burning of a lot of her effects and letters.