Please note that these are mounted to order. Paypal sometimes doesn't notify of payments so we suggest you also email [email protected]

2014 signaled the start of many events to commemorate the Great War of 1914-1918. There will be numerous events over the next few years during which medals of ancestors can be worn.

A New Zealander (or other commonwealth soldier , sailor or airman) who enlisted and embarked prior to the end of 1915 is entitled to the 1914-15 Star, The 1914-18 War Medal and the Victory Medal. ANZACS who served at Gallipoli were in 1967 awarded the Gallipoli Medallion. This was the only official recognition given for Gallipoli. The proposed Gallipoli Star was never awarded (until a privately funded issue in the mid 90s to surviving veterans). 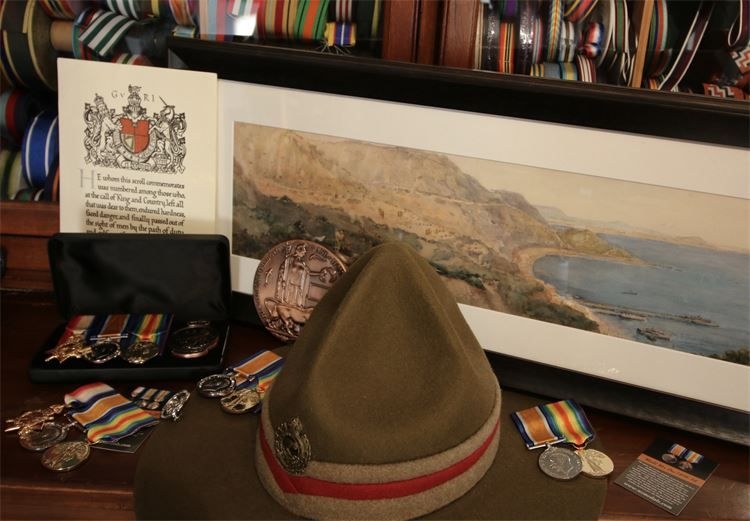 We struggle to compete with cheap replica medals being offered online. Some are sold as single medals, others pre-mounted. These are very poor quality medals in base metals imported from overseas and available to us for between $1-$5 each from various makers in China. You get what you pay for and we pride ourselves on the quality of our replica medals - some of which we break even on and simply make a mounting fee from.

Our primary stock of 1914-15 Stars for example are made in England on the correct dies and of the correct metal. A medal dealer recently stated that he struggled to tell the difference between our Stars and a genuine one.

Recently a lady brought a set of medals to us which she had purchased from a firm recommended to her by NZ Defence Force. The standard of mounting was awful and the quality of the medals was terrible - perhaps the worst we have seen. The medals were actually soft metal, one of the medals had already snapped - and to add insult to injury she had apparently paid $450 for the set. We would have charged her $150 the set and the replacement medal we provided her with stood out from the very poor replicas she did have.

All we can suggest is PLEASE shop around for prices and ask about quality. There are various cheap vendors of replica medals on trade me but you get exactly what you pay for.. Their ribbon is awful, ours is unique to us in New Zealand.

GIven to soldiers who were no longer able to serve due to wounds etc suffered in service. These badges were worn to prevent them from receiving the white feather - a sign of cowardice. They are popular to wear with WW1 medals to denote the recipient was wounded.

We have some very simple options for replica WW1 medals:

We have just sold out of the cased sets of WW1 medals as the cases are not available for a few weeks. Sets with Gallipoli Lapel Pins and Medallions will be added this week.

Our most popular product. The 1914-15 Star, 1914-18 War Medal and the Victory Medal mounted for wearing. These are the standard set of 3 medals awarded to every NZ Soldier who served at Gallipoli. Not cased and ideal to take to Gallipoli for those attending the Centenary events.

The standard trio with a genuine Silver Fern NZ cap badge and with a metal plaque bearing either your relatives name and details or a basic summary of the medals. Please provide naming details at checkout

The standard pair of medals awarded to all NZ soldiers who served at the Western Front and in the Middle East from 1916 onwards. Mounted for wear. Please specify if you require swing or court style.

We stock replicas of all the WW1 service medals (as well as the Gallantry and Long Service awards).

Each replica medal or medallion is priced at $50 which includes ribbon and mounting in either swing style or court style. The odd exception will be some more elaborate decorations such as the DSO - and even then we stock a very good $50 replica.

In addition we stock the miniature sized medals which are $40 each mounted.

Our full sized replica medals are solid metal and of the best quality.

The ribbons we use are the most accurate renditions in nylon of the original silk ribbons.

In addition to replica WW1 medals we are also able to supply genuine WW1 medals which have been repurposed. These are medals which have historically been pawned in England and have at that stage had their names erased (a common practice by veterans to save face). We have very limited stocks of these medals which we have had commercially polished and tidied to ensure that they appear nearly new. If you had them named they are a very true replacement for the missing medals of a relative (which will now not be replaced by the NZ Defence Force Medals Office). We have also had solid silver replicas made of decorations such as the Military Cross or Military Medal , which your relative may have been awarded.

Our commercial relationship with the official makers of medals in the UK also means that we can have them supply a named newly made replacement set of medals.

Original re-purposed WW1 medals are in limited stocks and prices are generally $120 per medal plus naming costs.

How about a frame of the 2 or 3 standard service medal replicas with a generic genuine Fern leaf badge (from a NZ Defence Force stock and untouched for over 70 years). We can personalise the brass name plate or can simply state "The Great War 1914-18" . From just $225 for a WW1 pair and $275 for a WW1 trio

PLEASE ALLOW 2-3 WEEKS FOR DELIVERY AS MEDALS ARE MOUNTED AS ORDERED.

WE REGRET THAT ETHICALLY WE HAVE MADE THE CALL TO NOT HAVE MEDALS NAMED ANYMORE.

The unopened parcel of original badges from which we use Fern Leaf badges.